End of the Olympus Leather Contest?

From the desk of Vonn Tramel, Owner Olympus Leather

In May of 2019 Olympus Leather Hosted some fantastic folks in Chicago for Olympus Leather Weekend 2019.  Among them was Laura Antoniou who was kind enough to take my money and give a keynote address of her choosing "whether I liked what she had to say or not".  Little did she know, that I had been pondering some of the things she had to say.

Why weren't events focusing on artists and authors?  Why were events SOOOOO focused on "just contests"? After all, titleholders "should" be doing SOMETHING...What were they actually doing?  I'd been having trouble answering that very question for the 6 years I'd been involved with Olympus Leather beyond traveling, teaching (teaching what?), and raising money (for what and did I KNOW the charities were getting their money? and that raised more questions than I had time to ponder).

WELP....2020 gave me A LOT of time to think about whether or not a pageant was the way to continue.  December 31, 2020, I made the decision and put out the word to Regional and Local Olympus Leather Producers that we were killing the pageant system as we knew it.  I have ideas.  Ideas for the way we pick future titleholders, the way we present our events, the way we utilize this family to promote our chosen charities, and the way we choose our charities.  The whole thing needed a good scrub and re-work.

In February 2021 a group of individuals comprised of Olympus Leather Former Titleholders, close family members, and Producers sat in on the first committee meeting to hear what I had to say.  Some liked it, some are still (as of May) not certain about the changes...I am CERTAIN that we'll come out the other side of this thing better for it.

I'm not ready to spill all the beans just yet, but we have chosen the date for the next event and I hope you'll join us for OLW 2021 Online.  This won't be just another Zoom Conference.  We'll have curated virtual museum displays and vendors marts where you can autonomously stroll through at your leisure, the Leather Quilt will be on virtual display as well.  Performances on the main stage by our community for our community, a special table reading of Laura Antoniou's Killer short "A SPICE Oddity".  NO Contest (this year) NO Classes, NO Auction. Chat roulette...and so much more is being planned!  And it's all FREE.  Registration will be opening soon.

David has been active in the Leather lifestyle since the mid-1980's, beginning his journey in Chicago. Though he has lived most of his leather life within the Master/slave dynamic, he has never felt comfortable using the title Master or calling himself Sir David until that distinction was recognized by his community, which occurred in 2013 with a formal covering that June.

He is a charter member and current Taskmaster (President) of the Knights of Leather, Minnesota, which celebrates its 30th anniversary this year! In 2002, he was instrumental in re-defining Minnesota Leather Pride, and has served on the organizing committee or board in some capacity since.

David, under the name Jazz Thomas, was named Mr. Olympus Leather 2000, and has been a three-time tallymaster for that contest. In 2004 he was first runner-up for American Leatherman. David served on the organizing committee for the 2007 Leather Leadership Conference: The Art of Sharing Power, in Minneapolis, and was a co-producer for American Brotherhood Weekend (ABW) in 2008 and 2009.

Pictured below after her international win. 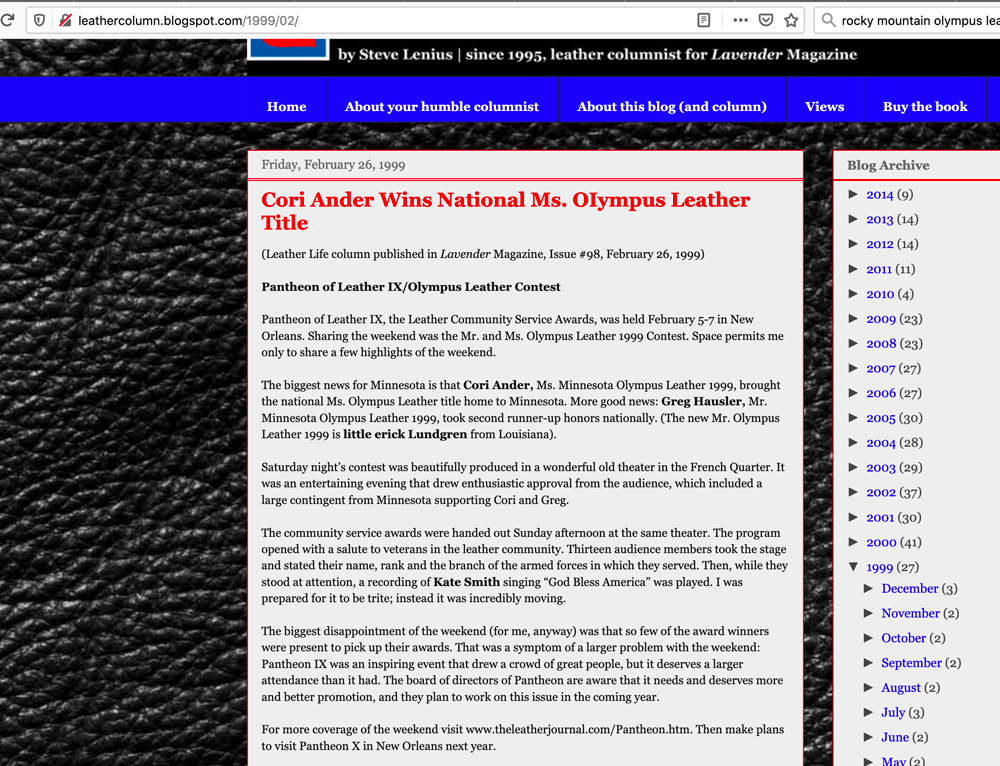